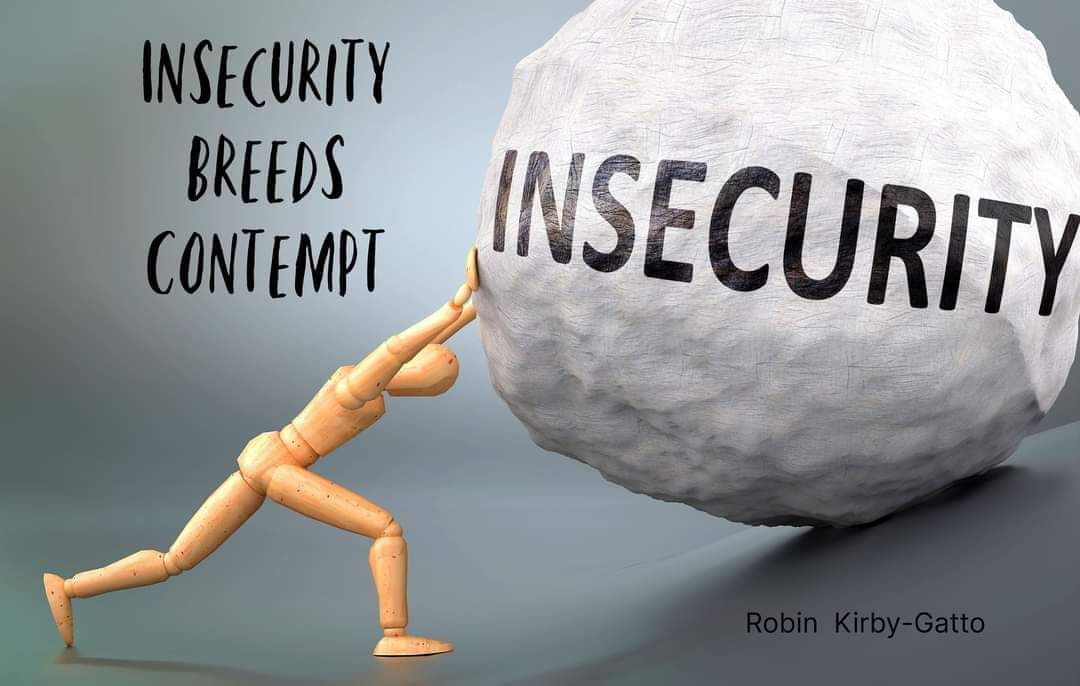 EMPOWERING LIVES WITH PURPOSE:
Today’s message: by Robin Kirby Gatto, Alabama
Insecurity can breed contempt.
Contempt is “the feeling that a person or thing is beneath consideration, to disregard.”
Insecurities are the quickest avenue to disrespect others. In this place, people one-up those whom they have contempt for, unconscious the issue is their soul. This was the dream God gave me two nights ago.
Insecure means “not firmly fixed, not confident or assured.” This comes from the Medieval Latin word, meaning “not,” and the Latin word meaning “free from care.” Thus, the insecure person is not free from the cares of this life, especially of others’ opinions of them or what they believe is the opinion of other people, even if it’s their own projection of self.
Contempt comes from two Latin words, con meaning “with” and temnere meaning “despise.” The word despise in Hebrew is buwz and means contempt and despise. The Hebrew Aleph Bet Letters that compose despise are Bet, Vav, and Zayin, which form the word picture THE HOUSE THAT’S ADDED A WEAPON THAT CUTS OFF.
An insecure person feels cut off from God and others. They reject themselves, unaware that it is their own soul condemning them. These insecurities result from past traumas in one’s life, which cause them to misinterpret others and project their own rejection onto them. They are paranoid, constantly feeling the need to prove themselves, and desire others’ approval.
From this state of the body, the person isn’t consecrated. They’re in the tongue of Gehenna, which continually speaks to them, thereby speaking to others. As a result, the need to validate oneself is heightened, hence leading to one-upping in every avenue to prove worth, not realizing they are holding others in contempt they are disrespectful.
I see this often. People have no regard for people’s walls, videos, phones, life, conversations, and the such, and try to elevate themselves and put others down while doing it.
They cut others off.
Saints, be humble before the Lord and let Him heal you. Know that He will make you whole. If you disrespect others, simply choose to honor them as a righteous person and watch the rewards God will pour forth. Many aren’t entering breakthroughs because of this very issue.
5 “If any of you is deficient in wisdom, let him ask of the giving God [Who gives] to everyone liberally and ungrudgingly, without reproaching or faultfinding, and it will be given him.
6 Only it must be in faith that he asks with no wavering (no hesitating, no doubting). For the one who wavers (hesitates, doubts) is like the billowing surge out at sea that is blown hither and thither and tossed by the wind.
7 For truly, let not such a person imagine that he will receive anything [he asks for] from the Lord,
8 [For being as he is] a man of two minds (hesitating, dubious, irresolute), [he is] unstable and unreliable and uncertain about everything [he thinks, feels, decides].” James 1:5-8 AMPC